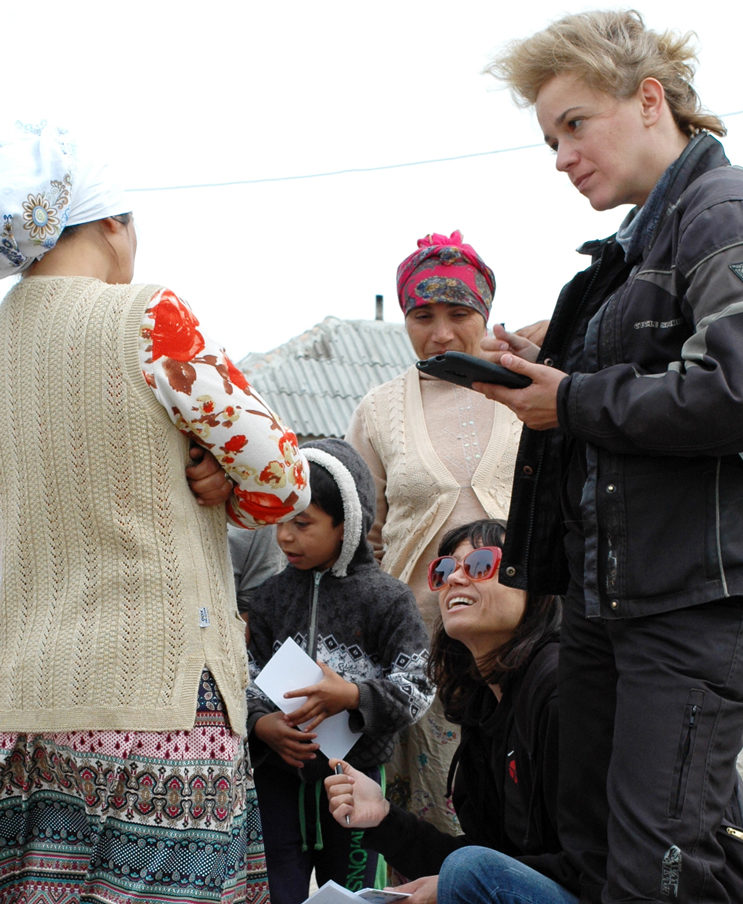 Adina and Nadia, talking to mothers in Castelu © Emmet Cooke

Support for Every Child in Preschool program – Law 248/2015 for encouraging impoverished children’s attendance in preschool, through food coupons of 50 lei (11 eur), conditional on regular attendance

The national program has funds allocated from the state budget for 110.000 children, estimated as eligible by the Labor Ministry (children from poor families, living with maximum monthly income of 284 lei per family member – equivalent of 65 euros). During the 2016-2017 school year, about 70.000 children benefited from the program. We are working with OvidiuRo to increase the number of impoverished children who are enrolled in preschool and who benefit of Law 248/2015.

We started in May 2017 in Castelu, Constanța county, and since September we are looking at how the law is applied in Dâmbovița county.

Because we knew that Castelu village has three extremely poor areas, with over 100 children of preschool age. We also knew that only 10 benefited from the food coupons incentive during this school year. The other 90 were either not enrolled at all in kindergarten, or their parents didn’t know how to file a request to be enrolled in the food coupons program.

We called the vice-mayor and to the school principal from Castelu, who told us they have a census of the children who should be enrolled in preschool from September on, but they need help with the registration. So, one day in May, we gathered a group of 15 volunteers from Bucharest and Constanta, and went door to door in Castelu, with the people from the local team, to talk to the parents and to register the children.

How did it go?

It was difficult, because everybody in this “horahai” community (Turkish-Roma, who are not recognized by the Turks, nor by the Roma ethnic groups) speaks Turkish, and we only had Cadrie with us – the school mediator, who is the only one from the local team who speaks the language and who is really trusted by the people there. It was also difficult because most parents have zero education, they cannot read and write, and therefore couldn’t spell for us the children’s names (who are difficult to understand for Romanians) – which made it hard for us to help them fill out the registration forms. And it was slow because on Garoafelor street, the only poor area we managed to go door-to-door in one day, there were indeed lots of children – and some of the parents, if they were home, were not sure how old their children were, if they were enrolled in preschool or not, or if they were enrolled in the food coupons program or not.

But it was also good – because we managed to fill out registration forms for 20 children (an entire extra class). It was also good because we managed to bring everybody in for a discussion (volunteers, teachers, social workers, the health mediator, the school principal, the vice-mayor, a local counselor and us, the NGO workers who have done projects in Castelu before), and we brought back to the table the importance of education – and a few possible solutions to help the impoverished children here attend preschool and school. Finally, it was good because for a few people – volunteers with different interests and jobs, who really wanted to be part of this process or incidentally crossed their path with us that day, it was a valuable dose of reality check. A contact with the poor people of Castelu that made an impression on them – which may, at some point, make them turn back and give a helping hand, here or in similarly poor community.